Amazon Kindle Fire: Is it a worthy iPad nemesis?

As have rumoured since last year, Amazon wanted to bite a piece of the Apple iPad success. Since the launch of their Kindle ebook reader, they want to upgrade it to be a worthy competitor in a tablet industry. It’s not a surprise why Amazon also join in the race for getting tablet users.

Amazon Kindle Fire tablet is Android based with 7 inches display screen and priced at about $199. It will be the cheapest tablet available in the market. However, minus all the features like 3G, microphone and camera. They focus on the price and sacrifice those high end components. Android app store can also be used to get the apps that you want to install. It is powered by a 1GHz OMAP dual-core CPU, 512MB of RAM, 8GB internal storage and a chassis that weighs 14.6 ounces.

Kindle Fire was made primarily to establish dominance in Amazon’s content selling business. That includes ebooks, music, movies and the like. The giant online retailer is focusing on it’s cloud business strategy to gain consumer support using this device. By giving it at low price, they won’t make that much money out of it. They are relying on their consumer online products that consumers will buy on their store. In a long term basis, this will be more profitable for the company.

However, the device cannot be compared to iPad due to lots of its features being removed to get the cheapest price. In the end, it will note make a serious threat to Apple tablet. On the other hand, it will make a serious damage to Android user’s market like Samsung, Blackberry and the like. Considering that success of the hot selling $99 HP Touchpad, consumers are geared towards the bargain price. And those with the best price have the chance to succeed in the tablet wars. 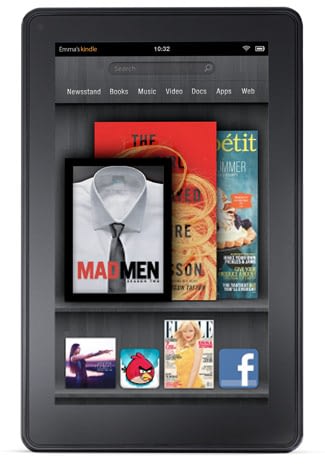