Let Us Give the Dead a Proper Burial

“I do not know the dignity of his birth, but I do know the glory of his death.”

This is the writing at the entrance of Libingan ng mga Bayani cemetery in Fort Bonifacio, Taguig City.

TV Patrol news yesterday tackled about the burial of the late president Ferdinand Marcos. Though deceased for more than 20 years, his remains is still not buried and lies in a glass coffin in Ilocos. The family of the late president insist of giving him a proper burial site in the famed cemetery, but still the public outcry expecially of those Martial Law victims are too loud to ignore. Current president Pnoy even excused himself on answering this sensitive issue.

The Republic Memorial Cemetery at Fort McKinley was established in May 1947 as a fitting tribute to the gallant Filipino men and women who brought honor to the country and fought for the sake of freedom and democracy. On October 27, 1954, the Memorial Cemetery was renamed Libingan Ng Mga Bayani (LNMB) by the late President Ramon Magsaysay. Presidential Proclamation No. 208 was then issued by President Ferdinand E. Marcos on May 28, 1967, to reserve an area of 142 hectares from the Fort Bonifacio Military Reservation. This was intended for National Shrine purposes and placed under the administration of the Military Shrines Services, Philippine Veterans Affairs, Department of National Defense.

The Libingan Ng Mga Bayani is under the administration and maintenance of the Grave Service Unit (GSU), a unit of the Philippine Army Support, Armed Forces of the Philippines. The mission of the GSU is to provide grave services to deceased military personnel who died in line of duty or were honorably discharged, Filipino veterans, former presidents, government dignitaries, statesmen and national artists. Aside from maintaining the LNMB and the military grave site at Manila North Cemetery, the unit is also capable of providing mortuarial and memorial services to authorized personnel.

As of October 2003, there are 43,592 remains interred at the Libingan Ng Mga Bayani and this includes the 32,268 remains of military personnel who died in Capas, Tarlac. Carlos P. Garcia and Diosdado Macapagal are the only former Philippine presidents who have been interred at the cemetery. The third president who was slated to be interred was Ferdinand E. Marcos, however, due to strong opposition coming from some government, military, and private sectors, this was not carried out. A burial place has already been prepared for Marcos though not executed due to public opposition.

Past is past, let us all move forward and heal the wounds created by the Martial Law regime. Former President Marcos is dead; let us give me a burial place inside the cemetery. We cannot argue the fact that during his time are the glory days of our Philippine economy. We were once considered as the best performing South East Asian country and envied by its neighbors. Gone are those days, and so the President behind it.

Whatever mistakes that he did in the past, let us all put behind and continue to move forward and to regain the glory that we once had.

(This is my point of view; I don’t intend to hurt anyone. I know some of you will object, please don’t be harsh on me… ) 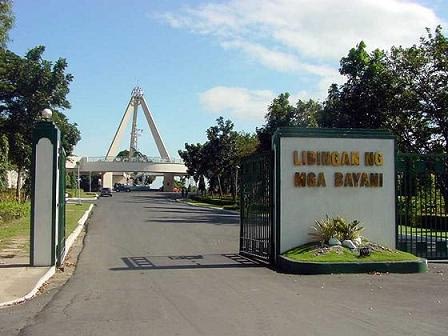 Previous: In View of Those Filipino’s in Death Sentence and Similar Fate
Next: Do We Really Need OEC (Overseas Exit Clearance)?