While people in countries like America, Europe and Singapore are waiting for the latest iPhone or iPad release, there are several countries who are not keen or even thrilled by this latest gadget craze. In a third world countries in Africa and Asia, having the most high end gadget is not something to aspire for.

With too much competition on top, NOKIA still cannot compete with bigger companies like APPLE. They have to admit that they don’t have the technology to directly compete with APPLE in the smart phone markets. Though they tried, but the result is not satisfactory.

However, low end market is still dominated by NOKIA. Just recently, they launched the new model, NOKIA 100 and NOKIA 101 to directly benefit those people with lower income. Before taxes, Nokia 100 sells for $30 while Nokia 101 sells for $35. 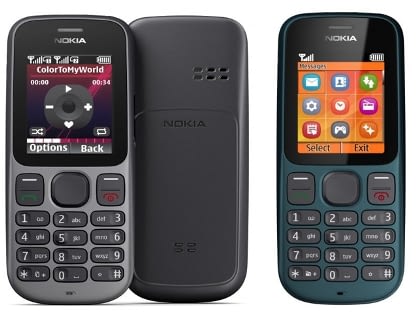 The Nokia 101 and 100 are low-cost phones based on the Series 30 operating system. The difference between the two is that the Nokia 101 supports dual-SIM and has an MP3 player. Designed with the fact in mind that these phones are often shared between families, they can support up to five separate address books and store personalisation details for up to five different SIM cards.

The display has a grid-based system of icons – we also need the phones to be usable by people who haven’t had the opportunity to learn to read. There’s an integrated flashlight – a handy addition for most of us, but extremely valuable if you live somewhere where’s there’s only power for a few hours a day. For the same reason, the battery life is extremely good compared to what you might have learned to expect from using a smartphone. These phones can last up to 25 days on standby, or 6.7 hours talktime.

But that doesn’t mean they aren’t versatile or useful. They come with an FM radio and – on the Nokia 101 – an MP3 player with a headset included in the box. There’s also support for memory cards up to 16GB on the Nokia 101, allowing thousands of songs to be stored. In addition, there are preloaded games and a 3.5mm AV connector so owners can connect the device to better speakers, for example.

Previous: Enhancements to the Employment Pass Framework
Next: Watch Out for HP Touchpad in Singapore COMEX 2011 for US$99