OFW Culture: The Good, the Bad and the Ugly

At present year 2011, Philippine population is estimated to be around 94 million, a 1.36% in the world’s total population. At the end of this year, it may end up to 96 million and still growing.

A total of about 23.1 million of Filipinos — about a third of the country’s 94 million populace — are still subsisting on below 2 U. S. dollars per day. This figure which is considered among the highest in Southeast Asia.

Booming population and increasing poverty level has been a sad reality and a major concern in our country. Several presidents have emerged in power and all of them leave having the same problem when they took the presidency.

Creating jobs for the masses is the best solution for all. However, there was none or only few are available for millions of applicants and unemployed Filipinos. Yearly, new graduates pile up to that figure.

As a result, many Filipinos seek better opportunities abroad to earn a living. Our country is not exporting manpower by the hundreds, but by thousands and even millions.

Currently there are about 8 to 10 millions of Filipinos working abroad. All of them are contributing in the development of the country thru their remittances. Last year alone, remittances reached up to $18.8 billions, a 10% of our country’s GDP.

In the absence of jobs offered by the government, they instead encourage Filipino’s to seek opportunities abroad. One way or the other, all their efforts are to strengthen the export of quality and the best mind of our country. They depend on them to steer the growth of our economy.

They call as modern day heroes, giving all the praises that they can give to please OFW’s to keep on continuing what they are doing. They are proud to show the figures that OFW’s helps in the development of our country.

In return, we haven’t seen anything they did to solve the root cause of unemployment.

Back in the Philippines, on the houses of every OFW’s, families are left behind. Children are left to parents or relatives so they can work full time abroad, taking care of other’s children. At start, working abroad is just a temporary solution. As time goes by, children growing up as well as the expenses, and temporary becomes a permanent solution to support the family. Kids are growing up without a complete family, and often times, they came up with excuses that they are doing everything for their own good. Replacing parental care with financial or any material items that they can provide.

OFW children are left behind. With the existence of a proxy parents, they still cannot fill the role of real parent. In some cases, these children are prone to being drug dependent and other vices that leads them to a different path. And with huge remittances their parents provide, they become materialistic and a big spender. Most of them are school dropout, if not a problem child in their school.

With continued rising of population, poverty, OFW’s and children left behind, I wonder where our country is heading. 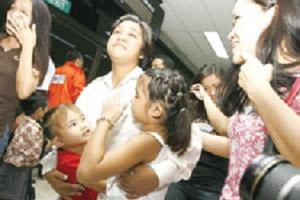 Previous: Tablet Wars: Which side are you?
Next: Raspberry Pi Foundation and It’s $25 PC