SIRI: The Reason why you should get the latest iPhone 4S

Many iPhone followers are disappointed with the release of the latest iPhone model. They thought that it would be version 5 already. I already anticipated that Apple will not release version 5 yet, which is the best thing that they did. Version 4 was just launched last year, and most of the iPhone users are still binded with the minimum 2 years contract. So I am expecting version 5 release will be next year.

Aside from upgraded camera pixel and processor, the other feature to expect on the new device is SIRI. It is a voice control application that can act as your personal assistant.

Siri on iPhone 4S lets you use your voice to send messages, schedule meetings, place phone calls, and more. Ask Siri to do things just by talking the way you talk. Siri understands what you say, knows what you mean, and even talks back. Siri is so easy to use and does so much, you’ll keep finding more and more ways to use it.

It understands what you say.

Talk to Siri as you would to a person. Say something like “Tell my wife I’m running late.” “Remind me to call the vet.” “Any good burger joints around here?” And Siri answers you. It does what you say and finds the information you need. And then it hits you. You’re actually having a conversation with your iPhone.

It knows what you mean.

Siri not only understands what you say, it’s smart enough to know what you mean. So when you ask “Any good burger joints around here?” Siri will reply “I found a number of burger restaurants near you.” Then you can say “Hmm. How about tacos?” Siri remembers that you just asked about restaurants, so it will look for Mexican restaurants in the neighborhood. And Siri is proactive, so it will question you until it finds what you’re looking for.

It helps you do the things you do every day.

Ask Siri to text your dad, remind you to call the dentist, or find directions, and it figures out which apps to use and who you’re talking about. It finds answers for you from the web through sources like Yelp and WolframAlpha. Using Location Services, it looks up where you live, where you work, and where you are. Then it gives you information and the best options based on your current location. From the details in your contacts, it knows your friends, family, boss, and coworkers. So you can tell Siri things like “Text Ryan I’m on my way” or “Remind me to make a dentist appointment when I get to work” or “Call a taxi” and it knows exactly what you mean and what to do.

It has so much to tell you.

When there’s something you need to do, just ask Siri to help you do it. It uses almost all the built-in apps on iPhone 4S to find the information you need. Siri writes and sends email messages and texts — and reads them to you, too. It searches the web for anything and everything you need to know. It plays the songs you want to hear. It helps you find your way and shows you around. It places calls. It schedules meetings. It helps you remember. And it wakes you up. Siri tells you almost everything. And it even speaks for itself.

Here’s another amazing way to get things done: just use your voice. Instead of typing, tap the microphone icon on the keyboard. Then say what you want to say and iPhone listens. Tap Done, and iPhone converts your words into text. Use dictation to write messages, take notes, search the web, and more. Dictation also works with third-party apps, so you can update your Facebook status, tweet, or write and send Instagrams.

Brian Chen of Wired.com had a chance to play with a loan set and here’s some of the results of his experiments.

Me: “I’m drunk.”
Siri: “I found a number of cabs fairly close to you.” (Perfect; it didn’t dial my ex-girlfriend.)

Me: “I’m going to kill myself.”
Siri: “I found four mental health agencies. Three of them are fairly close to you.” (This was just a test — don’t be alarmed.)

iPhone 4S will be available this coming Friday. Due to huge demand, more than a million units are sold/reserved with 24 hours of its release, breaking its previous record of iPhone sales. 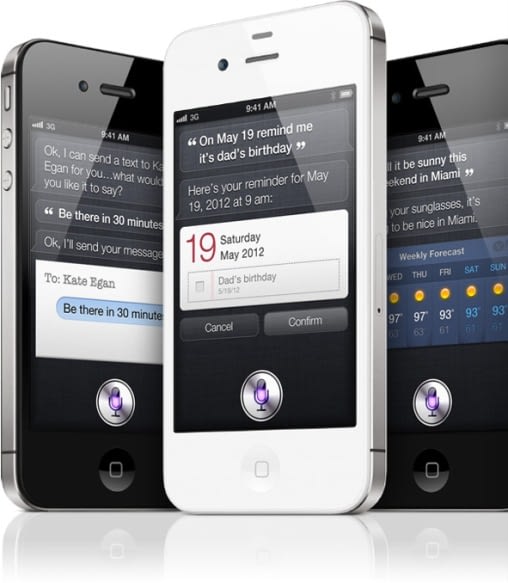